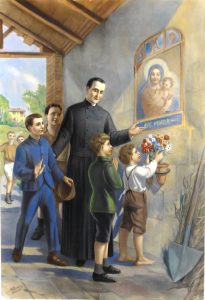 Even as a young seminarian, St. Gaspar Bertoni was assigned by his Pastor as the Apostle of the Youth.  Among his duties, he taught catechism to the youth of the Parish.

After his ordination as a Priest on September 20, 1800, Fr. Bertoni continued to appreciate as a central apostolate the teaching of catechism for every level of membership among his Apostolic Missionaries – a ministry often mentioned in his Original Constitutions as a prime apostolate. From the beginning, he proved himself to be a Missionary of God’s Word under its various aspects.

Fr. Bertoni was also assigned by his Bishop in 1810 as Apostle to the Clergy and Seminarians. In this work, he preached weekly spiritual conferences with meditations on The Exposition on First Kings, by St. Gregory the Great, and on St. John Chrysostom’s Commentaries on Genesis and on Matthew, and annual retreats.

An Aspect of the Mariology of St. Gaspar Bertoni in his Parish Sermons

In presenting the charism of St. Gaspar Bertoni, he and his early community were much devoted to the Espousals of Mary and Joseph – which is now our Patronal Feast.  Surprisingly, though, St. Gaspar has not left us any written spiritual or theological development of this devotion in the early community life, discovered so far in our studies.

However, he was personally much devoted to the Blessed Mother of God, Mary,  Virgin and Mother –never referring to her as “Spouse”. The student of St. Gaspar’s life is rewarded with an extended written record on St. Gaspar’s life as it unfolded – beginning with his seminary catechism lessons; his sermon on Humility while he was still a Deacon – plus a number of early  Parish sermons.  Later we find his personal spiritual Diary, Constitutions, seminary instructions and retreats. A major document is his Epistolario, containing so many of his personal letters of spiritual direction.

There is offered here a number of these early Parish sermons presenting St. Gaspar’s love and devotion for the Spouse of Joseph, Virgin and Mother of God.

These captions from Fr. Bertoni’s writings, as well as a few of those of his early followers, have been arranged in a kind of Liturgical order.

The purpose is to provide a kind of anthology, or regular meditative reflections for the various Liturgical times of the year, from Fr. Bertoni’s own thoughts.

These have been researched and then arranged by the late Fr. Ignatius Bonetti, CSS [+ October 3, 1998]  – a well-known Stigmatine theologian who studied St. Gaspar in a very profound manner.

The Conferences on The Spiritual Exercises
of St. Ignatius of Loyola

Among Fr. Bertoni’s voluminous writings, Fr. Joseph Stofella made clear that there are in evidence various courses of retreat notes in Fr. Bertoni’s own hand-writing. Whenever these texts were ‘edited’ by the Stigmatine experts, there appear both additions as well as eliminations of the original texts. What follows here is a translation of Fr. Bertoni’s texts as they appear in the Manoscritti Bertoni, with the addition of the translator’s own personal notes. Fr. Louis Benaglia, CSS, transcribed all these, and gave them marginal numbers which help greatly in identifying them:

In the spring of 1810, the Benedictine Bishop Liruti assigned Fr. Bertoni to preach the autumn retreat that year to the Clergy of Verona. This began a formal ministry of St. Gaspar among the clergy, that made of him also a Missionary to the Priests and seminarians.  This form of the Apostolic Mission was reflected in St. Gaspar’s Original Constitutions – and is still in vogue today.

Fr. Stofella presented this text in CS, Volume I, in 1957. He accompanies it with his own very helpful Introduction, covering pages 100-105 of that Volume.

The late Fr. Nello Dalle Vedove, CSS exerted a strong intervention in editing this particular Retreat, dating his work as of September 23, 1960.  Fr. Nello stated in his introduction [CS II, pp. 384-388] that this, too, would have dated this work of St. Gaspar toward the very beginning of this form of his Ministry in the service of Bishops, i.e., around 1810, or shortly thereafter.  This Apostolic Mission to Priests, seminarians and Religious stands out as one of the central munera of St. Gaspar Bertoni.

Fr. Nello notes the sources used here, in addition to the Spiritual Exercises of St. Ignatius. There may be noted as well the influence of the classic Rodriguez, and the biblical scholar, Cornelius a Lapide. Fr. Nello notes that St. Gaspar’s great Commentary, transcribing for the most part that of St. Gregory the Great on the First Book of Kings [Samuel], would complete these retreats to Priests and Clerics. The Commentary on First Kings was the source of Fr. Bertoni’s early weekly Conferences to the seminarians after 1810, when the Bishop asked this service of the Founder, and of the Stigmatines.

The date of this retreat is not given either. While the previous two courses of retreats for Clerics contain about 500 paragraphs of Fr. Bertoni’s Manoscritti, this longer Retreat covers almost 700 paragraphs.  These are divided in a general way as follows:

Meditations on St. John Chrysostom’s Commentary on Genesis and on Matthew

This great Father of the Church from the East powerfully appealed to Fr. Bertoni particularly in his conferences to the seminarians of Verona in the early years of his priesthood. St. Gaspar commented on Chrysostom’s treatment, particularly On Genesis, and On Matthew.

In the voluminous writings of St. Gaspar Bertoni, there appear three ‘panegyrics’ on Franciscan themes: the first two might have been delivered on the evening before and on the morning of St. Francis’ Feast Day.  In these two rather lengthy texts, St. Gaspar follows the ‘style of writing about the Saints’ lives: there is a bit of biographical data provided, but most of the discourse centers on the Theological Virtues [Faith, Hope, Love] and the Cardinal Virtues [Prudence, Justice, Fortitude, Temperance].  As these were lived by the Blessed during their earthly sojourn.  This style of writing is much like the legendary nocturne accounts of the old Roman Breviary, telling of the wonders of the Saints’ lives.  This is more or less the style of writing manifested by hagiographers of an earlier extensive biographer, earlier hagiographers.

The sign of St. Francis’ union of heart with the Lord was the mystical gift of the Stigmata of Jesus impressed on his body.

Fr. Bertoni’s third document on Franciscan spirituality was dedicated to St. Veronica Giuliani, Capuchin mystic – who was canonized around this time.  Fr. Bertoni prepared this address for the summer of 1839, but he was too ill to deliver it himself.  One central great interest in this discourse of the Stigmatine Founder is his development of the Stigmata in the mystical life of St. Veronica, and then its Easter Sunday emphasis.  The life-long ‘ambitious migration’ of the believers’ faith journey is meant to be nourished by the Eucharist, leading one through the dark valleys of human existence to the eternal Espousals with the Trinity in heaven.

In her mystical insights, St. Veronica envisions herself as receiving the wedding ring to her by the Lord Himself, taking the nuptial band from His open side and bestowing it on His Bride on Easter Sunday morning.

[Instructions to the Acolytes]

This is a document of a retreat of St. Gaspar in the diocese of Verona given in his early priesthood. This work is not original with St. Gaspar. He translated a work of a Belgian monk from French into Italian. Then Fr. Facciotti modernized Fr. Bertoni’s antiquated Italian.