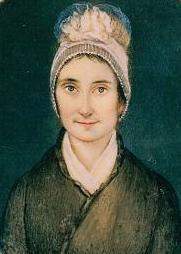 Fr. Bertoni assisted a number of religious in their journey home to the Lord – thus, he was also the Apostle to the members of Religious Communities, or of the Consecrated life, and one of the most outstanding was Mother Leopoldina Naudet, Foundress of her Community of the Sisters of the Holy Family.

Leopoldina Naudet [1773-1834], was born in Florence, Italy, on May 31, 1773, of a family of French origin, which had moved to Florence as part of the Hapsburg-Lorraine Court.  As a young child, she lost her Mother in death, and was then entrusted to the Monastery of the Nuns of St. Frediano, in Florence. She subsequently furthered her early education in France, with the Sisters of Notre Dame of Soissons.  She then returned to Florence at the age of 16. With her sister, Luisa, she later accompanied the Grand Duke of Tuscany, Leopold to the Court of Vienna, as the tutor of the three last Archdukes. She lived in Prague with the Archduchess Maria Anna, named Abbess of the Chapter of Nuns of St. George.  She visited with the Abbess the more important cities of Europe, and assumed positions of trust in the Instituted known as “The Beloved of Jesus.” To this community, she committed her life in collaboration with Father Paccanari and the Archduchess.

Padua, Loreto, Venice and Verona were the successive stages on the long journey which Leopoldina traversed sustained by her faith.  From 1808 until 1816, she worked in collaboration with Madelene di Canossa.  From 1816 until her death, she dedicated herself entirely to the formation of her own religious family, which came into being through her desire to serve God and the Church.

In this enterprise, she found great assistance in the counsels from men well known for their sanctity and learning: Gaspar Bertoni, John Rozaven, John Roothaan and Louis Fusari, the Superior of the Oratorian Priests n Verona.  She left to the Sisters of the Holy Family the challenge of the civic, moral and Christian education of the youth. To these Sisters, she communicated her apostolic ardor, by bringing together the active life and an intense and profound contemplative life.

On December 23, 1833, Pope Gregory XVI approved the religious institute founded by her, crowning years of intrepid expectancy.  In the following year, on August 17, 1834, Leopoldina died, repeating to the end to her daughters: “I want only what God wills!” This principle had been the sole program of her entire life, lived in trusting abandonment, until her death.

Community of the Sisters of the Holy Family